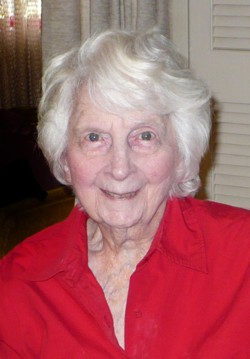 My Grandmother passed away on Thursday, Oct 10th at the age of 101 – I was surprised how it still came as a shock.

Grandma Jo taught me that there was treasure everywhere – secrets, knowledge, beauty, faith and understanding if you were patient enough to see it. She showed me it was more important to know how to find a fact than to keep it in your head. She demonstrated grace and forgiveness as she moved through the world.

Over the last few years she slowly slipped into Alzheimer's. Every year there was less and less of the brilliant woman I grew up with, less and less of the sharp minded reference librarian who could find out anything with just a bit of time. In her late 90s she rediscovered a love of playing Dominoes, she would spend hours playing with the residents and staff of her retirement community and even as her memory slipped away she could still add up a game board faster than anyone else at the table.

From her I learned a deep love of knowledge and reading. She was endlessly curious about everything, clipping articles, reading constantly and absorbing knowledge from every possible source. It was a heartbreaking tragedy that her mind was slipping away at the same time the internet was opening up boggling amounts of information, she would have loved having access to all the world.

When the call came I felt the air escape my lungs as my world shifted slightly on its axis. The days that followed were busy with a psychic fair in Columbus followed by a quick trip to Texas for the service. There were only passing moments to mourn – only seconds to breathe.

I took a walk Tuesday afternoon after the funeral. The light was fading toward sunset and as tired as I was I needed to walk. Grandma always found treasure when she walked - shells, pretty stones, feathers and colorful leaves. Nestled in the grass was a purple flower with a bright yellow center, it was no bigger than a pencil eraser. Without her I may never have seen such a tiny bit of beauty. Without her I may never have known that the world is full of treasure.

Josephine Rose Furry Williamson, 101, of Beaumont, died Thursday, October 10, 2013. She was born in Beaumont on February 25, 1912, to Lucy Eberspacher Furry and Harley Furry. Josephine graduated from South Park Junior College and The University of Texas at Austin. She was a librarian at Tyrell Public Library and later at Lamar University. Her hobbies included oil painting, gardening, and reading, and she was a lifelong member of St. Mark's Episcopal Church.

She is preceded in death by her husband, John E. "Red" Williamson; sister, Mary Fulton; and brother, Harlan Furry.

A gathering of Mrs. Williamson's family and friends will begin at 1:00 p.m. with her memorial service to follow at 2:00 p.m., Tuesday, October 15, 2013, at Broussard's, 2000 McFaddin Avenue, Beaumont, with burial of her cremated body to follow at Magnolia Cemetery, Beaumont.

The family would like to thank her caretakers, Liz Yelverton, Joyce Baker, Joan Sensat, and Debra Teague, who had become like family to her.

View the Photo Slideshow from the Memorial Service