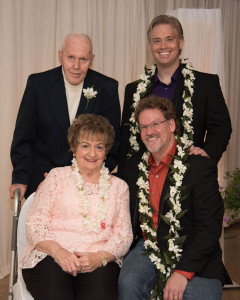 On April 10th, My farther in law, Joseph William Tkalec, passed away.  We knew it was coming, my husband was with him, it was still a shock that left us with a huge hole in our lives.

I knew him for almost nine years and I never really understood him or felt I knew him very well.  In the last year of his life I helped care for him every day, taking him to appointments, helping him get up and get dressed, bathroom trips, and feeding him at the end.  In some ways I knew him extremely well and intimately, but in others he was a mystery to me.

For the two years we lived with him and took care of him, Joe and I fell into the habit of constantly checking on him, looking after him, and making sure he was as well cared for as we could.  We were always listening for sounds of trouble and ready to leap when we heard him fall.

We worried that we weren’t doing enough, that we were doing too much, and wondering if we could have done more to make his final years better.  Some of those worries may never pass.

Months after his passing, I am starting to let go of some of those habits.  Starting to sleep a little deeper and releasing some of that constant vigilance.  Caring for him, knowing him, living with him, and learning to love him changed me.  I am still understanding all the ways I have been changed.  I am grateful for the opportunity and I am forever grateful for the man he raised.

At home on Saturday, April 10, 2021, Joseph W. Tkalec, age 82, passed peacefully. He was born in 1938 in Akron and was a member of the Central High School class of 1957. Upon graduation, he immediately joined the Marine Corps and after his service he began a career in law enforcement. He worked as a deputy with the Summit County Sheriff’s office and the Lane County Sheriff’s office in Oregon, and ended his career as a Crime Scene Specialist in Scottsdale, AZ. Soon after retiring, he returned to Ohio to be near his siblings.

In his free time Joe enjoyed fishing, his motorcycle, and gambling in Las Vegas.

Joe took great pride in his family and his friends. He is survived by his devoted son and son-in-law, Joe and John Thornton; his beloved sister, Barbara Otterman; brothers, Jim and Tom; sister-in-law, Irene Bowman; and many lifelong and devoted friends. He was predeceased by his wife, Jean (Bowman) Tkalec whom he adored, and his parents, Frank and Mary Tkalec.

A few days ago while I was out for a quick run through the cemetery (very respectfully), I found myself trapped in a cycle of worry and fear over Joe’s upcoming surgery. I kept trying to jolt myself out of it, but I found myself thinking of worst case scenarios and trapped in the fear he was going to die. In that moment I felt like I tapped into a global well of pain and sadness so deep that my heart skipped.  Literally. I felt a sharp pain in my chest scary enough to jolt up my shields and bring me back to the present before I face planted on the pavement.

I immediately headed for home, but I couldn’t stop thinking about the well of pain I had felt.  Bigger and deeper than I could imagine or process.  When I got back to the house I wasn’t ready to go in yet, I didn’t want to take that energy back inside. So I decided to lean in, put on depressing music and cry a bit and wander the mostly abandoned back streets in our neighborhood.

I couldn’t get the catharsis I was looking for, I just felt numb.  Then something caught my eye, a small patch of wildflowers growing out of a rotting stump. I know these flowers, they grew wild around my childhood home and they have most Metal name ever: Purple Dead Nettle also known as purple archangel.

I decided it was the omen I was looking for so I picked a small bouquet and took them home to Joe before looking up the symbolism:

Purple Dead Nettle ~ is associated with happiness, cheerfulness, determination and tenacity. It can grow just about anywhere, even when the soil is of poor quality or practically non-existent. 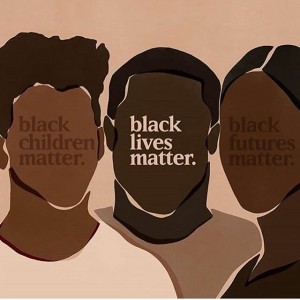 Saying Black Lives Matter doesn't discount all other lives any more than saying "Save the Rainforest" means burn the redwood forest instead or "Save the Whales" suggest f*ck the dolphins. It calls attention to the way that black lives and black people have been treated as less important than white people. It calls to attention the systemic racism of our justice system. It shines a light on the racism of so many American citizens and it does it in a way that many people, even people who are not racist (or don't like to think of themselves as racist), find uncomfortable.
We should be uncomfortable. When we who would be allies to the oppressed and mistreated step back from language that makes racists uncomfortable, even something as simple as saying all lives matter, when it is incredibly obvious that all lives do not matter equally in our society, we are giving aid and comfort to the racists. We are letting the "mildly" racist feel smugly self justified in their better and more inclusive phrasing.

Don't make racists more comfortable. Make it uncomfortable to be racist. Make it very clear that racism, even "casual" racism or racist "jokes" have no place in society.

Make it scary and uncomfortable to be racist.

Uplifting Energy in the Cemetery

The last few days I’ve felt called to take walks in the cemetery. 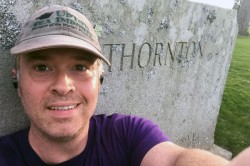 Yesterday I was overcome with joy and gratitude at the beauty of that quiet space and I gathered those feelings in my chest for a moment and then released them outward in a burst of energy.  A few moments later I felt a response rush back to me with the feeling of dozens of feather-light hands on my low back and under my arms lifting me up.  My feet never left the ground but my step was light and my stride was long.  It only lasted a few moments, but I ran effortlessly until I crossed through the front gates of Tod Cemetery and came back to the regular world.